When friuit bodies first appear from the woodland floor they are covered entirely in pointed white warts, as seen here. As Caps become expansive the red pellicle shows through until eventually the cap comprises mainly red skin with white warts distributed more or less evenly across its surface. Rain n or Physical Contact can to remove some white flakes from Fly Agaric Cap , so some specimens might be bright red only

Cap Ranges from 10 to 20cm diameter at maturity; red or occasionally orange (and very rarely a white form is seen: it does not have red spots, although some picture-book Fly Agarics are depicted in this way!). Caps usually flatten or even become slightly concave when fully developed, but occasionally the Fly Agaric remains broadly convex.

Stem 10 to 25cm long and 1.5 to 2cm in diameter; white and ragged with a grooved, hanging white ring. Swollen stem bases retain whiteemains of the sack-like rvolva, which eventually fragments into rings of scales around the base of mature specimens 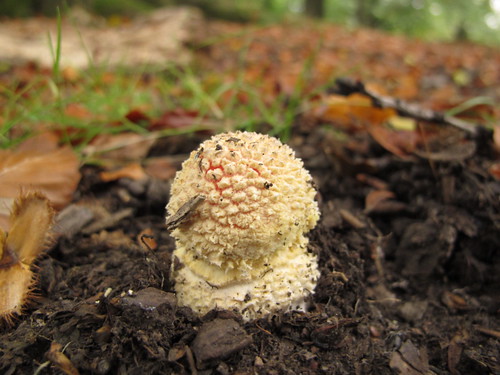