Diet: Well known for feeding on the corpses of dead animals. Will also feed on other insects.

Features: Wing casings are brightly marked with two wavy orange bands and fall short of the abdomen , and also the antennae have bobbles on the ends. of th four similarly marke species d. N. vespilloides is the only one to have all black antennae.

There are several similar species, all commonly known as Sexton beetles or burying beetles. They get their name from the practice of digging a hole beneath a dead animal and then pulling the body down into the hole. Beetles usually work in pairs, and afterwards females will lay her eggs next to the corpse for her young to feed on when they hatch.

Nicrophorus vespillo - concave on inside edge of hind tibia , presence of golden hairs on the fore margin of the pronotum

Nicrophorus vespilloides - the only one with black terminal antennae, wing cases fall short of abdomen

Nicrophorus humator - the only all black species

Habitat: Anywhere that dead animals might be found. They often fly towards lights at night, This specimen was photographed ironically when a thunderstorm was about to break (Lightening flashes )
These beetles perform an important role in getting rid of carrion . Males and females cooperate to bury this matter, by digging beneath the bodies to provide a food supply for their larvae

Distribution: Found throughout the U.K. 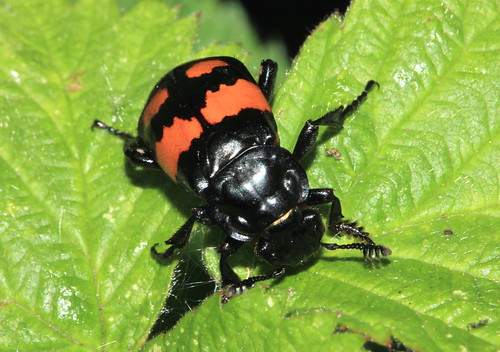 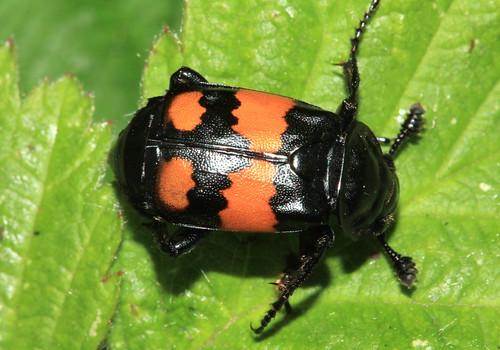 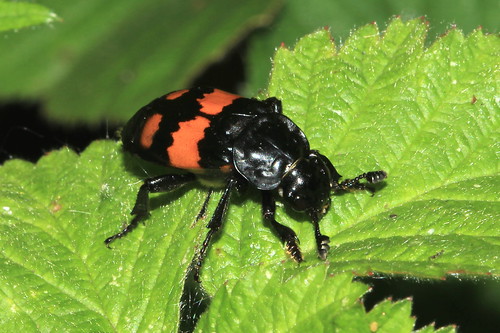 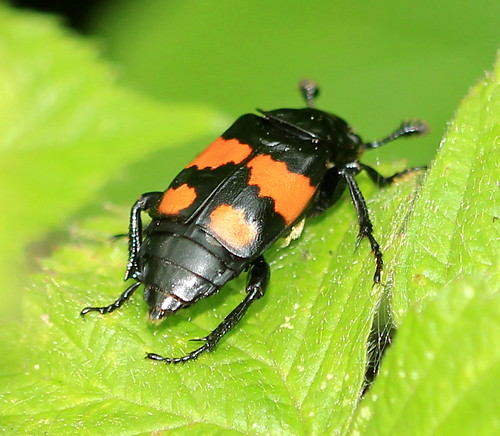 It is thought that Sexton beetles can smell a rotting corpse from up to a mile away.

Sexton or "burying beetles" belong to the Family of beetles called Silphidae (Carrion Beetles). There are several species found in the British Isles, and apart from the black sexton beetle, Nicrophorus humator which is entirely black except for its red tipped antennae, all have distinctive RED-ORANG markings on the wing-cases, aand appropriately called the banded sexton beetle, Nicrophorus investigator

Sexton Beetles are found on carrion and often bury small dead animals (rodents, birds, etc.) as a food store for themselves and their offspring. These beetles can fly long distances to locate carrion, presumably attracted by smell. When the beetles find a small carcass, they creep underneath and excavate the soil below, pushing it to the sides and using their jaws to cut away obstacles, such as grass roots. In this way the dead mouse or bird slowly sinks into the earth until it is completely buried. The female beetle lays her eggs in the soil, close to the buried carcass, and remains there until the eggs hatch. There appears to be some degree of parental care, in that the female beetle regurgitates a brown liquid of partly digested food for the young larvae, until they are large enough to eat the carrion on their own. Fully grown larvae burrow into the soil to pupate, away from the remains of the carcass (if any), and eventually emerge as new adult beetles to start the cycle again. Sexton beetles are therefore beneficial as scavengers by helping to clear away the corpses of dead animals.

Such Beetles are often infested by tiny reddish-brown gamasid MITES (Gamasus species), which cluster between the body segments, under the wing-cases and anywhere else that the beetle cannot easily reach with its legs to dislodge them The mites are thought to suck fluid from the beetles but this activity seems relatively harmless and many of them may be just 'hitching a ride' as the beetles fly off to new habitats in search of carrion. Similar mites are also associated with many of the large flying scarab or dung beetles and heavy infestations are often found on young queens of some bumblebees.